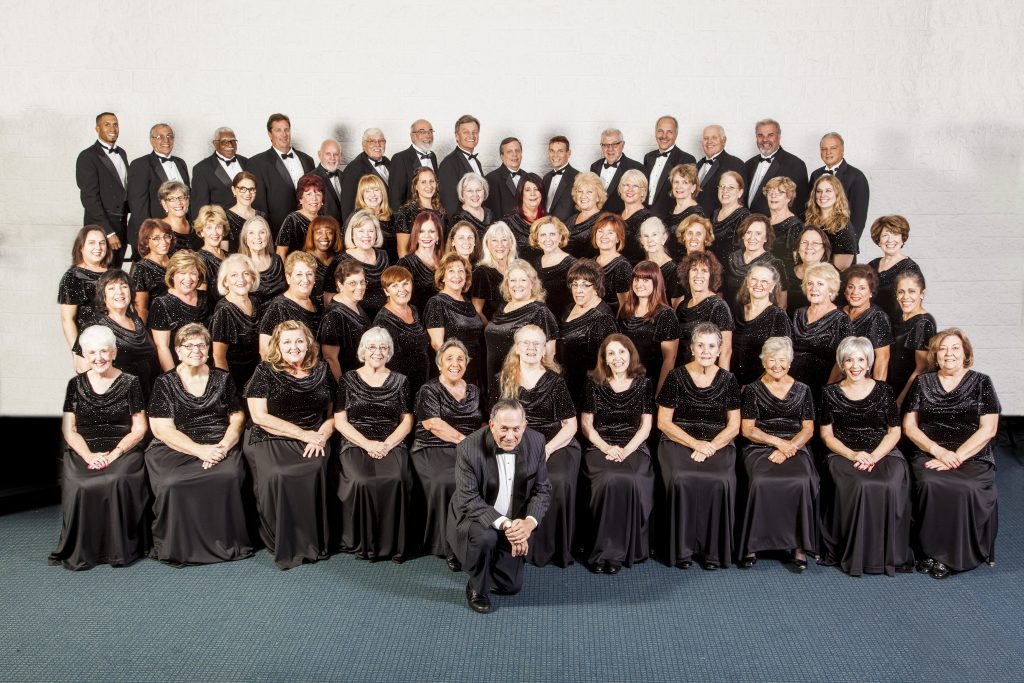 The Robert Sharon Chorale
Who Are We?

Who are we?  We are singers – and can be described by the voice part we sing in The Robert Sharon Chorale. We might be Soprano I, Soprano II, Alto I, Alto II, Tenor I, Tenor II, Baritone, or Bass. But – we are much more than that. We range in age from 26 to 86.  Collectively speaking, we have 88 children, 106 grandchildren including 2 sets of twins, and 8 great grandchildren.

As you might guess, most of us are from the Northeastern part of the United States, having been born in New England or the Mid-Atlantic states.  However, the other sections of the United States are represented as well.  Some of us were born in the West, Mid-West, or the South, even in West Palm Beach.  So far, no one has identified either Alaska or Hawaii as his or her birthplace.   We have several members who were born in other countries; China, Germany, Cuba, Finland, Israel, and Italy.

This diversity obviously accounts for the fact that we speak many languages – other than our shared language of music.  Among us, we have speakers of Greek, Spanish, Hebrew, French, Finnish, Swedish, Yiddish, Gaelic, German, Chinese, and Italian.  One person identified that he or she is conversant in several computer languages:  Fortran, Basic, Pearl, and Unix.  Most of us would agree that those are foreign languages to almost all of us.

The span of our ages would suggest that while many of us have completed our formal education and are retired, there are many who will continue to explore new avenues educationally as they work towards more academic degrees.  Currently, we have members whose highest level of education is high school, business school, or having accomplished an associate’s degree.  There is a plethora of Bachelor’s and Master’s degrees in a variety of fields: Educational Leadership, Communications, Elementary Education, Nursing, Social Work, Marketing, Statistics, Pastoral Ministries, Public Administration, Organic Chemistry, Mathematics, Public Administration, Graphic Design, Anthropology and Art, Business, Reading Language and Cognition, Theatre, and Music.  Additionally, we have members who have earned doctorates in the following fields: Educational Psychology, Christian Education, Mathematics, Art History, Educational Leadership, and Music.

For some of us, music has been both front and center in our lives.  We have members who have had interesting and varied singing experiences and some who have sung professionally.  Their experiences include singing at weddings, the National Anthem at Dodger Stadium, singing Gilbert and Sullivan operettas with The Savoyards – the oldest Gilbert and Sullivan group in the United States, singing with an oldies band, singing with the Voices of Liberty in Disney World with Sara Brightman and Josh Groban, singing Barbershop for 12 years, and another who auditioned for American Idol. Currently, we have one member who is employed as a Cantorial Soloist.

What else have we done?  We have volunteered here and abroad.  Our members have helped to start the community garden in Pompano Beach, helped at an orphanage in Nepal, volunteered in the Sar El program in Israel repairing damaged radios and helmets, volunteered in Hawaii in a jungle kitchen on the Big Island, lived on a kibbutz for a year, and taught dancing to special needs children in Israel.  We have two ham radio operators, one of whom is also a flight instructor.  Surprisingly, one member flew back and forth to Switzerland to retrieve James Galway’s gold flute that he had left there after a concert tour.

As members of The Robert Sharon Chorale, while we enjoy singing together for our own pleasure, we enjoy sharing our music with you, our audience.

ALL are welcome – come be a part of our musical family!!!

The Robert Sharon Chorale is a community organization which strives to present the best of all types of choral music – Sacred and Secular – in a concert setting.

Our mission is to share the magical sounds of Choral singing with the public.

Our goal is not only to convey the joy of making music, but to foster music appreciation, as well. We believe music is the “universal language of the heart”, which can be understood and appreciated by all.

In addition to concerts in Florida, the Chorale undertakes European concert tours in an effort to share our voices and our music.